Talisker distillery (pronounced Tal-is-ker)  is an island single malt Scotch whisky distillerybased in Carbost, Scotland on the Minginish Peninsula on the Isle of Skye. The distillery is operated by Diageo, and Talisker’s 10 year old whisky has been nominated as part of their Classic Malts series. The brand is considered a premium Single Malt Whisky.

The spirit is most frequently matured in American oak casks. The malt is peated to a phenol level of approximately 18–22 parts per million (ppm), which is a medium peating level. Additionally, the water used for production, from Cnoc nan Speireag (Hawk Hill), flows over peat which adds additional complexity to the whisky.

The distillery began producing special bottlings of the whisky for connoisseurs in the early 2000s, with a 20- and 25-year bottling (where previously only a 10-year and 18-year were available). The 25-year bottling, despite being more expensive than the 20-year bottling, was distributed more widely.

In 2007 Talisker 18-year-old won “Best Single Malt In The World 2007” at the World Whiskies Awards, and in 2015 Talisker 10 Year Old won a Double Gold Medal and “Best Single Malt Scotch up to 12 years” in the San Francisco World Spirits Competition. 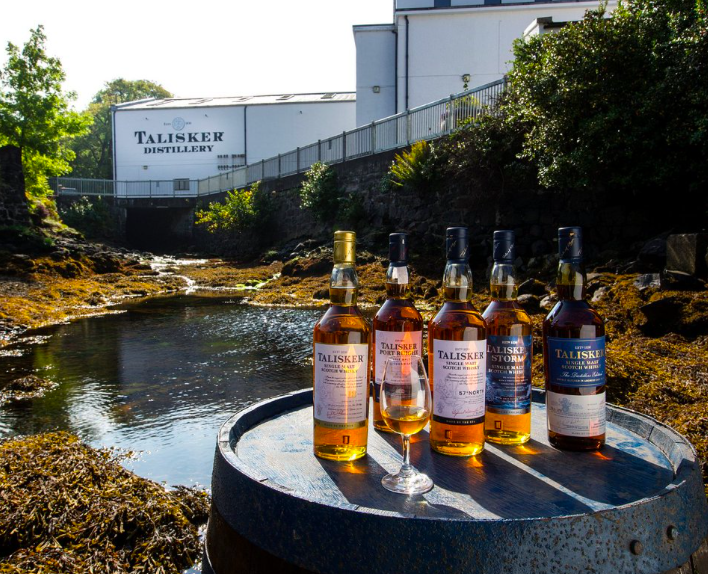 Talisker’s founders, brothers Hugh and Kenneth MacAskill were classic Clearance landlords. Having bought the tack [rent] of Talisker House on Skye and extensive lands in 1825, they set about forcibly shifting the resident population from their farms, either to new settlements at Carbost and Portnalong on the shores of Loch Harport and Portnalong, or off the island entirely.

As well as replacing subsistence farmers with more profitable sheep, another of the MacAskill’s money-making schemes was distilling. In 1830, they opened their Talisker distillery in Carbost using the cleared populace as its workforce.

Their venture into whisky-making was not a success and by 1848 the bank was in control. For the next three decades Talisker stumbled through a series of other owners who found it hard to keep afloat a distillery which is remote even by 21st century standards.

In 1880, Talisker’s fortunes changed when Roderick Kemp and Alexander Allen [see Dailuaine] bought the distillery and proceeded to expand the site and construct a distillery pier – until then all the casks had to be floated out to waiting ships.

Kemp sold his share in 1892 in order to buy Macallan and on Allen’s death in 1895, his business partner Thomas Mackenzie took charge and three years later Talisker was formally merged with Dailuaine (and Imperial). When Mackenzie himself died in 1916, a grouping of major blenders, John Walker & Sons, John Dewar, W.P. Lowrie, and DCL took control, an indication as to the quality of the spirit. Talisker has remained within the same grouping (the firms all merged and eventually morphed into Diageo).

In 1960, the distillery burned down and was silent until 1962 while it was being rebuilt. A decade later the maltings closed and the distillery began getting its requirements from Glen Ord.

Talisker had long been available as single malt from independents such as Gordon & MacPhail, and also officially, predominantly as an eight-year-old. In 1998, it was given greater prominence as a founding member of the Classic Malts Selection when the age was upped to 10 years. An 18-year-old joined the range in 2004, but since 2008 the range has expanded dramatically with no-age-statement quartet: 57˚North, Storm, Dark Storm and Port Ruighe. It is now one of Diageo’s most important single malt brands.

1825
Hugh and Kenneth MacAskill purchase the rent of Talisker House on Skye
1830
The MacAskill brothers found Talisker distillery in Carbost
1848
The brothers go bankrupt and the lease is transferred to the North of Scotland bank
1857
The bank sells Talisker distillery to Donald MacLennan for 500 pounds
1863
MacLennan markets the distillery for sale after failing to make a go of it
1867
Glasgow's Anderson & Co takes controle of the distillery
1879
John Anderson is jailed for fraud, after selling imaginary casks of whisky to clients
1880
Alexander Grigor Allan and Roderick Kemp take over operation of Talisker
1892
Kemp sells his share in the distillery to fund the build of Macallan
1894
The Talisker Distillery Co. is founded
1895
Alexander Grigor Allan dies and his business partner, Thomas Mackenzie, takes over
1898
Talisker Distillery Co. merges with Dailuaine-Glenlivet Distillers and Imperial Distillers to form Dailuaine-Talisker Distillers Co.
1916
Mackenzie dies and a consortium of whisky companies, including John Walker & Sons, Take over
1928
Talisker's regime of triple distillation is stopped
1960
A major fire breaks out at the distillery, halting operation, and a major repair job begins
1962
The distillery reopens after two years of repairing
1972
Talisker ceases its own malting and buys malt in from Glen Old
1988
Talisker 10 becomes one of the six Classic Malts
1988
The distilleries visitors' centre is opened
1998
The distillery is upgraded with a new mash tun and five worm tubs
2001
Talisker release its 25 year old Diageo Special Release 2001
2004
Talisker 18 year old joins the core range
2005
Talisker 175th Anniversary bottling is released
2008
NAS release, Talisker 57° North, is launched
2009
Talisker release its 30 year old for the first time.
2013
Talisker Storm, Dark Storm and Port Right are released
2013
The visitors centre is given a 1 million pound upgrade
2012
Talisker release the Talisker 35 year old, and the 35 year old Diageo Special Release
2021
Talisker release the Talisker 43 year old Expedition Oak
“ From rugged coastlines and wild storms to warming rays of sunshine and cloudless skies, the Isle of Skye flows through our veins and invigorates our souls. Unpredictable elements meet unadulterated beauty to create Talisker single malt scotch whisky: a whisky that is as wild, as raw and yet as refined as our island itself.”

The shape of the spirit still is a plain shape. 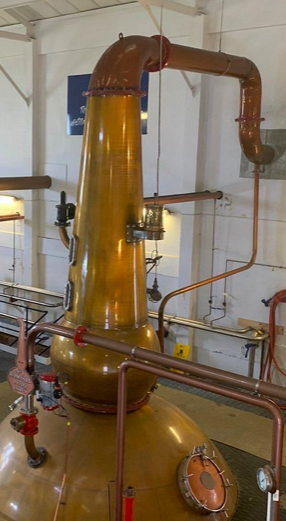 The shape of the wash still is a Neck ball 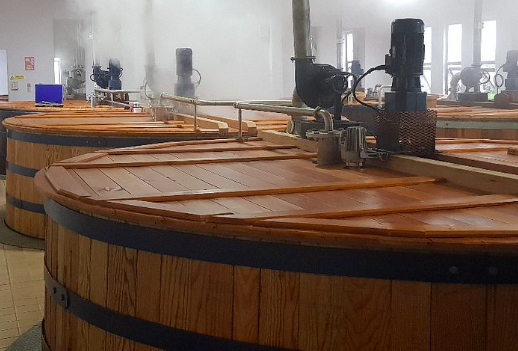 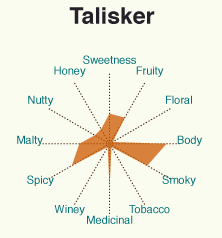 The taste profile of a typical Talisker will be:

Raw yet refined, just like our island, our whiskies invite the palate to explore the facets of Skye.

Hits of maritime notes come in waves, always reminding us this is a whisky Made By The Sea.

At this point Talisker core range is: 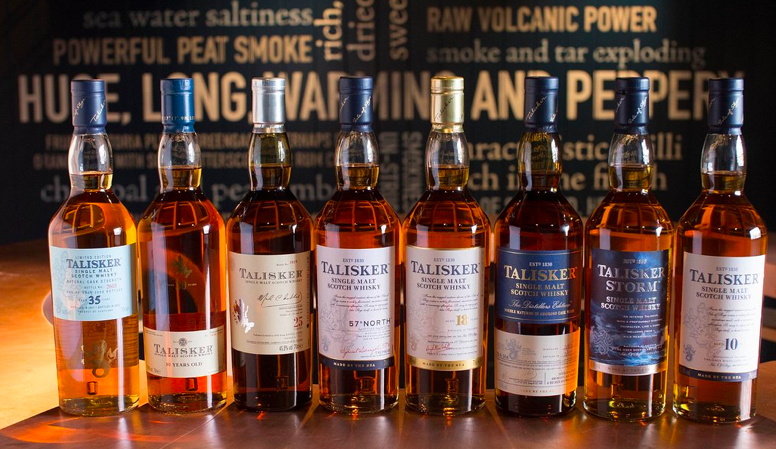 All the bottles released by Talisker sorted by year.

Let us welcome you to Talisker and share with you an insight into the history, people and passion that makes Talisker single malt whisky so special. This experience includes a walk through of our distillery, with one of our knowledgeable guides, and culminates with a tutored whisky tasting of 3 drams of Talisker. 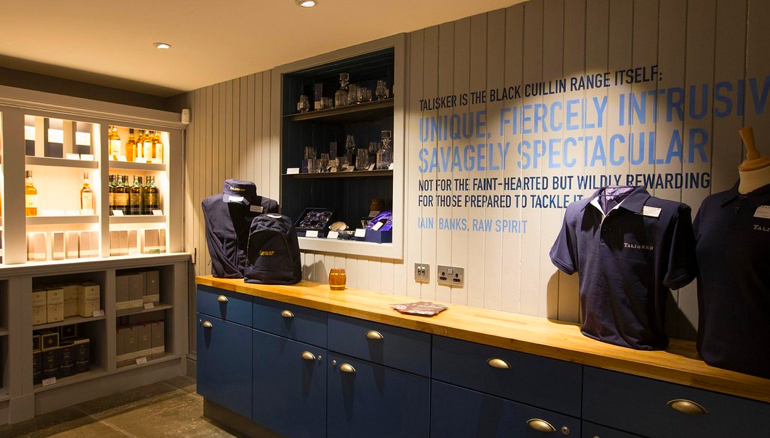 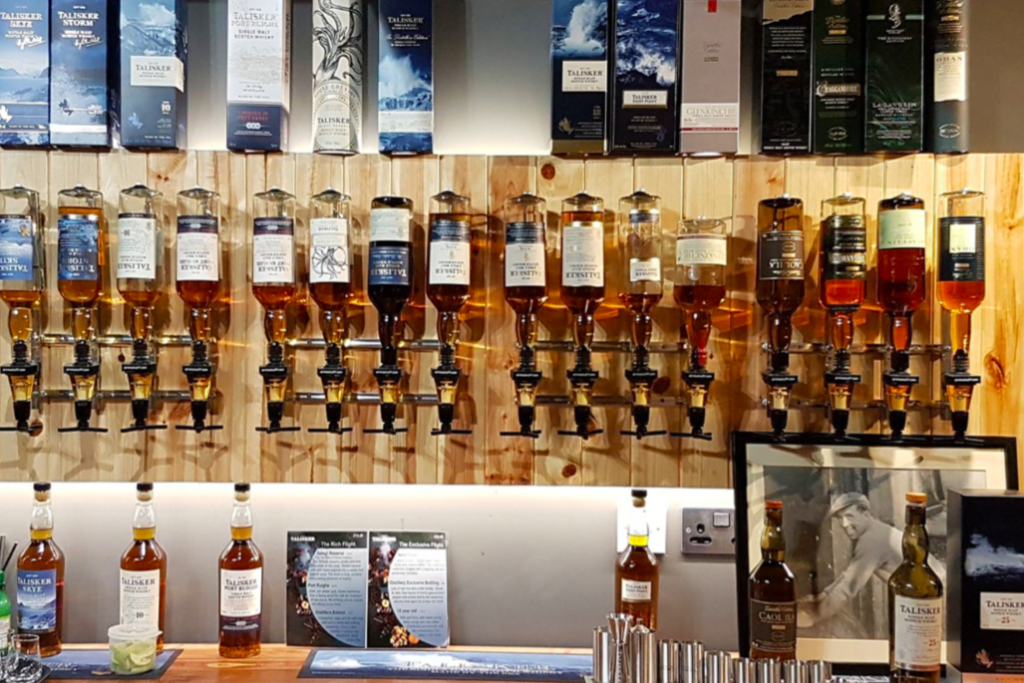