Today, the distillery is owned by the French alcoholic beverages company Pernod Ricard, which also oversees the distillery’s production of 5,900,000 proof litres per annum. The majority of this – enough for 6 million bottles – is sold as The Glenlivetsingle malt, with the remainder being used in Pernod Ricard’s blended whisky brands. 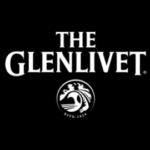 Although The Glenlivet is widely believed to be the oldest operational distillery in Scotland, it isn’t. That honour goes to Strathisla, while Glen Garioch could be even older. The Glenlivet was however one of the first to take out one of the new licences issued after the passing of the 1823 Excise Act which is accepted as being the starting point of the modern Scotch whisky industry.

George Smith was the man who did it. A farmer (which in those days in this region pretty much meant an illicit distiller), he had the ‘tack’ [rent] of the Upper Drumin farm in the southern part of Glen Livet. As it was his landlord, the Duke of Gordon, who had helped to push the Act through, there was little chance that Smith wouldn’t get a knock on the door from the Duke’s factors ‘persuading’ him to mend his ways.

Not that this was without danger. Whisky smuggling had been underway for almost 40 years by that time and the gangs were both well-established and relatively wealthy. Plenty of the new distilleries were razed to the ground. George Smith famously travelled with a pair of pistols in case he was attacked by his former colleagues.

His venture was a success and his Glenlivet whisky – conceivably made in a lighter style even at this stage – became popular. As the money came in, he took the tacks of Minmore and Nevie and with demand rising, built a second distillery at nearby Delnabo in 1850. His Edinburgh agent, Andrew Usher, then released ‘OVG’ [Old Vatted Glenlivet] initially as a vatted malt and then the first recognised blend. Smith’s Glenlivet was at the core of both.

Although the Drumin distillery burned down in 1858, and Delnabo (always suffering from water issues) closed the year after, Smith had started work on a new, larger plant at Minmore which opened in 1859 and still operates today.

‘Glenlivet’ had been used as a shorthand for what we now know as Speyside whiskies since the smuggling era. By the 1860s, the title was being appended to distilleries’ names as far north as Elgin, much to the irritation of the Smith family who had by then trademarked Glenlivet.

In 1881, George’s grandson, George Smith Grant, by then running the family firm, sued the companies who had added Glenlivet to their name. It took a further three years for a compromise resolution to be signed. This allowed the Smith’s distillery to call itself The Glenlivet, while the others could hyphenate their name with ‘-Glenlivet’. Over the years, 26 distilleries have styled themselves in this way although the practice now appears to have died out.

The Glenlivet was always available as single malt, but it wasn’t until after the Second World War that it began its rise. By then the firm was being run by Bill Smith Grant who saw the American market as offering new opportunities for the whisky, making it arguably the first single malt brand of the modern era. That said, even in the 1970s, 95% of its production was for fillings.

In 1952 it merged with Glen Grant, then that firm joined forces with blender Hill, Thompson & Co(owner of Queen Anne and Something Special) and the Longmorn/Benriach distilleries. In 1978, three years after Bill Smith Grant’s death, Seagram (owner of Chivas) paid £46 million for a controlling stake. Soon after, The Glenlivet became the largest selling single malt in America, a position it still holds today.

The mighty Seagram empire was divided up in 2001, with Pernod Ricard and Diageo dividing the spoils between them, with the former taking the Scotch division, renaming it Chivas Brothers. It was its new owner who, a decade later, unveiled a £10m investment which increased the distillery’s capacity by 75%. The aim is now to make The Glenlivet the world’s top selling single malt. Sales now top a million cases a year. When Bill Smith Grant started in the 1950s, it was less than 700 cases.

The distillery runs its own community, The Glenlivet Guardians. Membership includes access to a club room in the distillery and chances to assist in special bottlings. 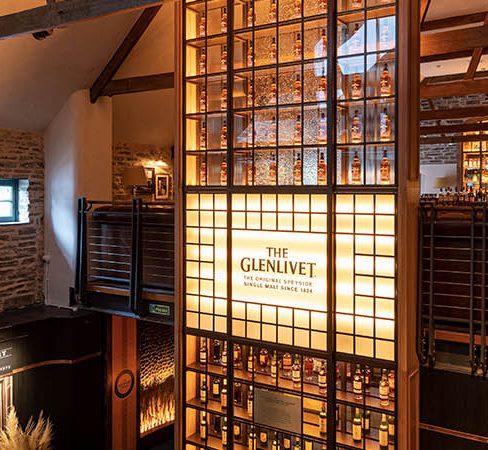 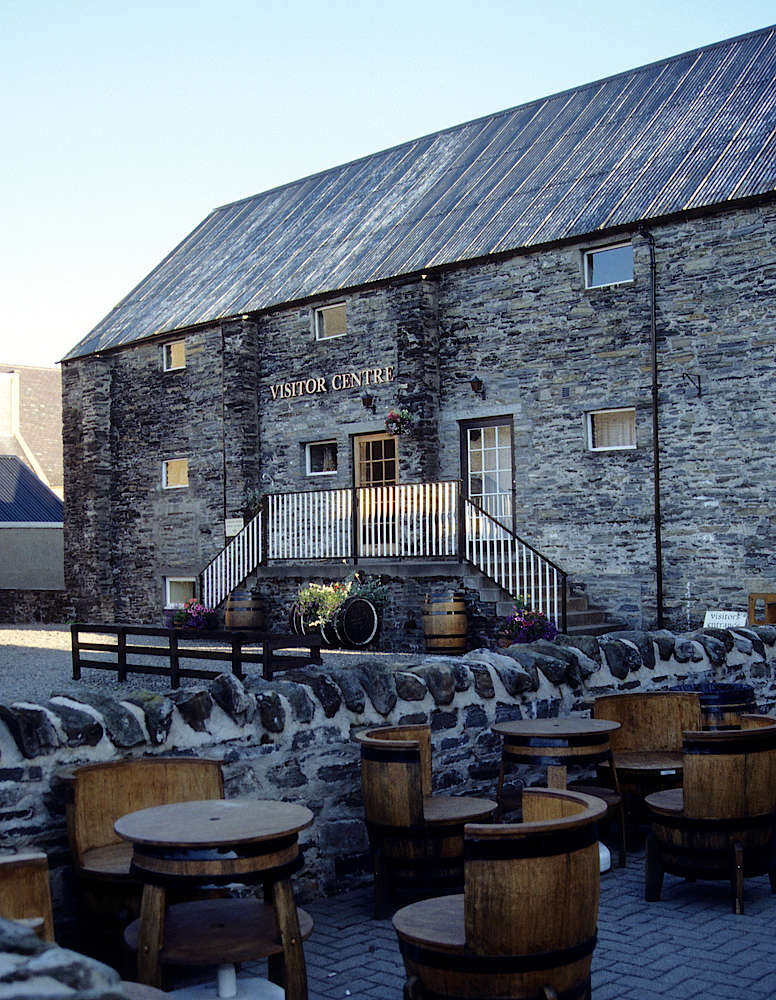 Timeline of the Glenlivet

3 by steam heat exchanger, others by steam elements 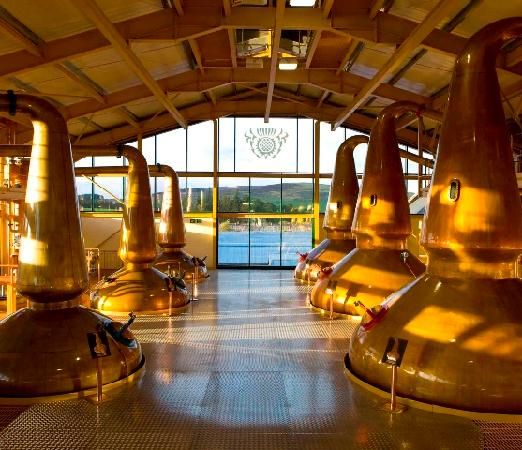 7 wash stills with a traditional Speyside shape with a lamp glass. 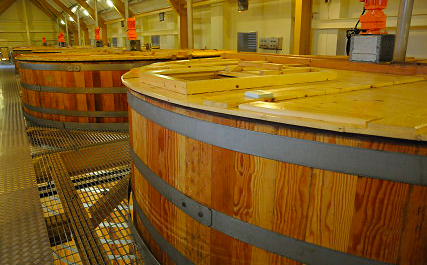 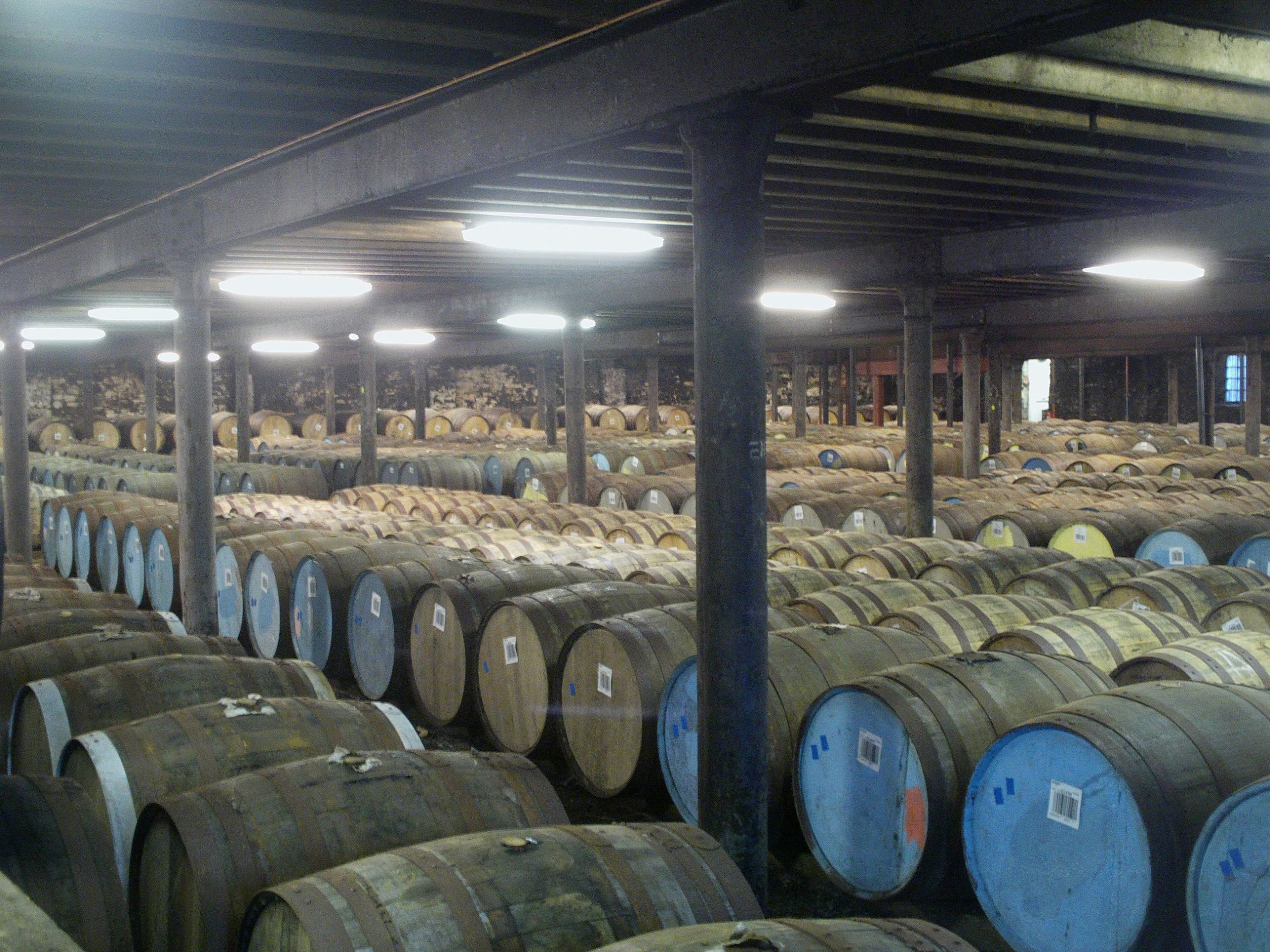 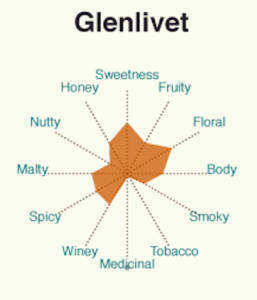 The taste profile of a typical the Glenlivet will be:

At this point The Glenlivet core range is: 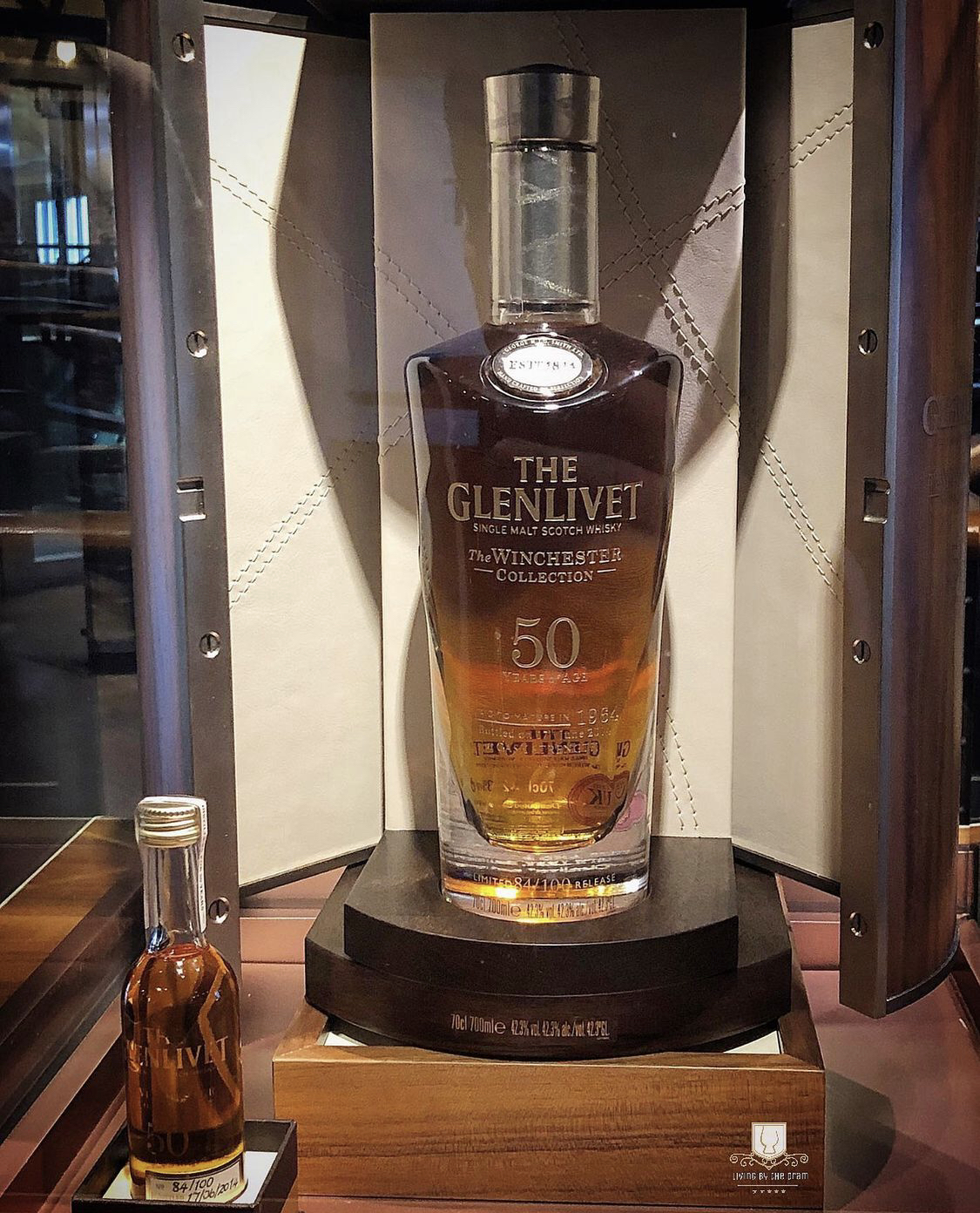 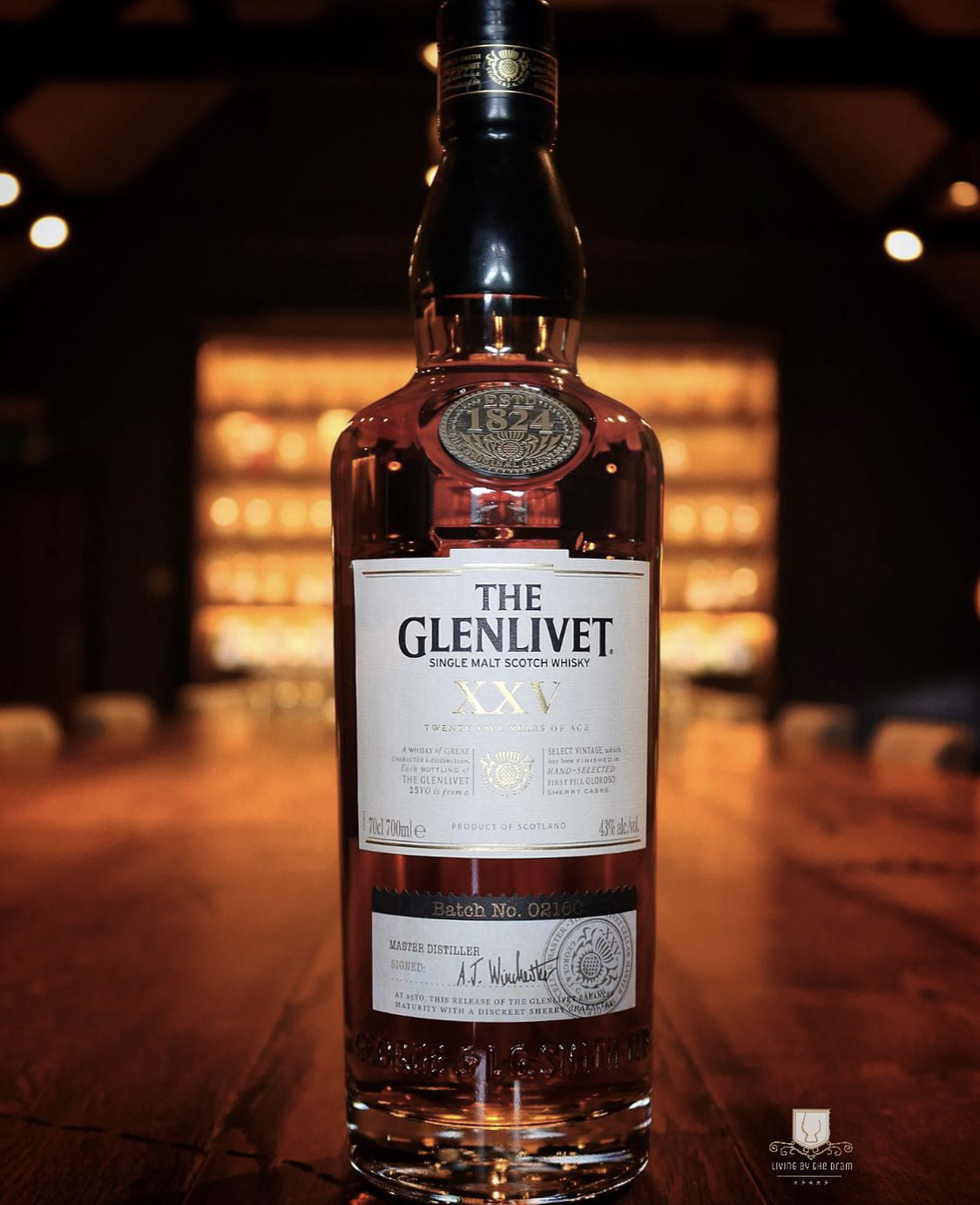 All the bottles released by The Glenlivet sorted by year.

Started from the beginning until present. 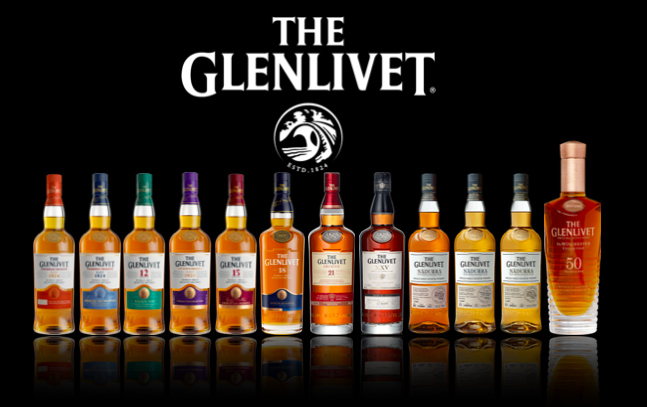 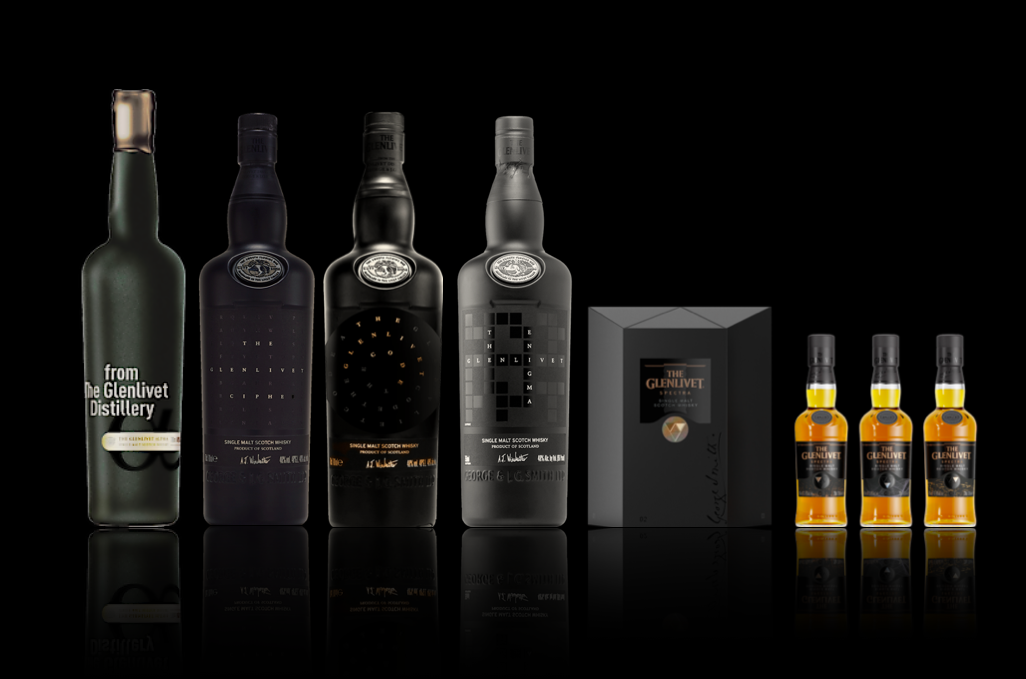 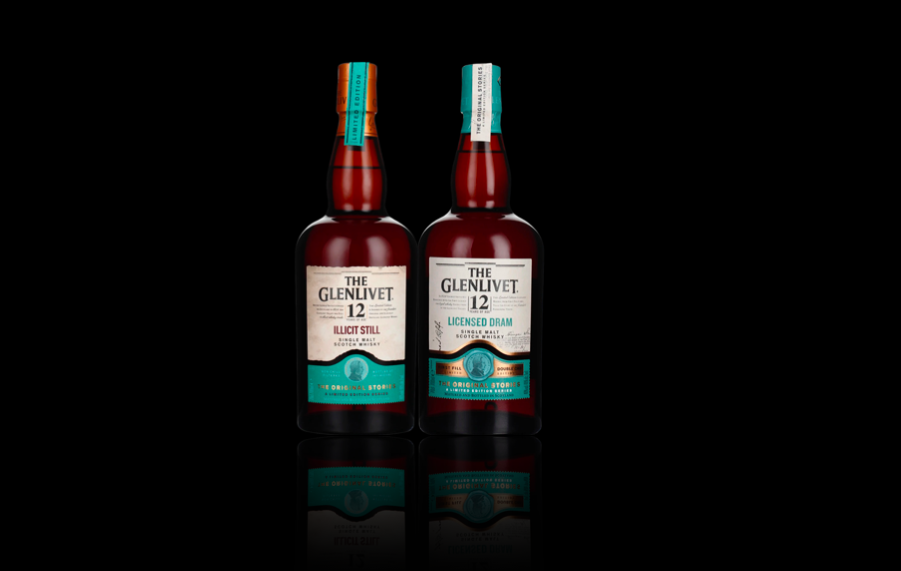 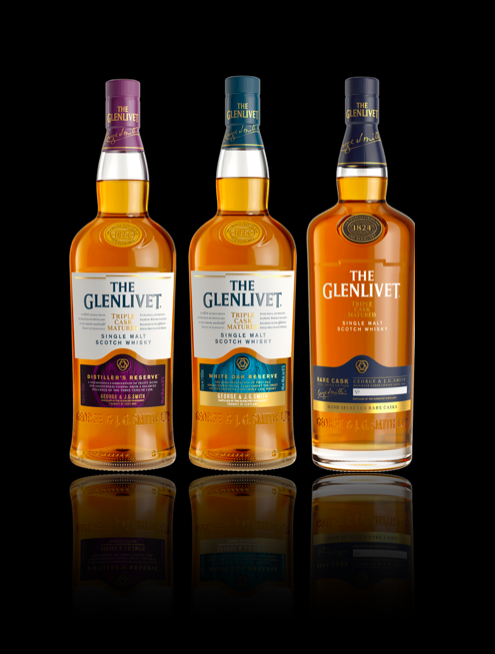 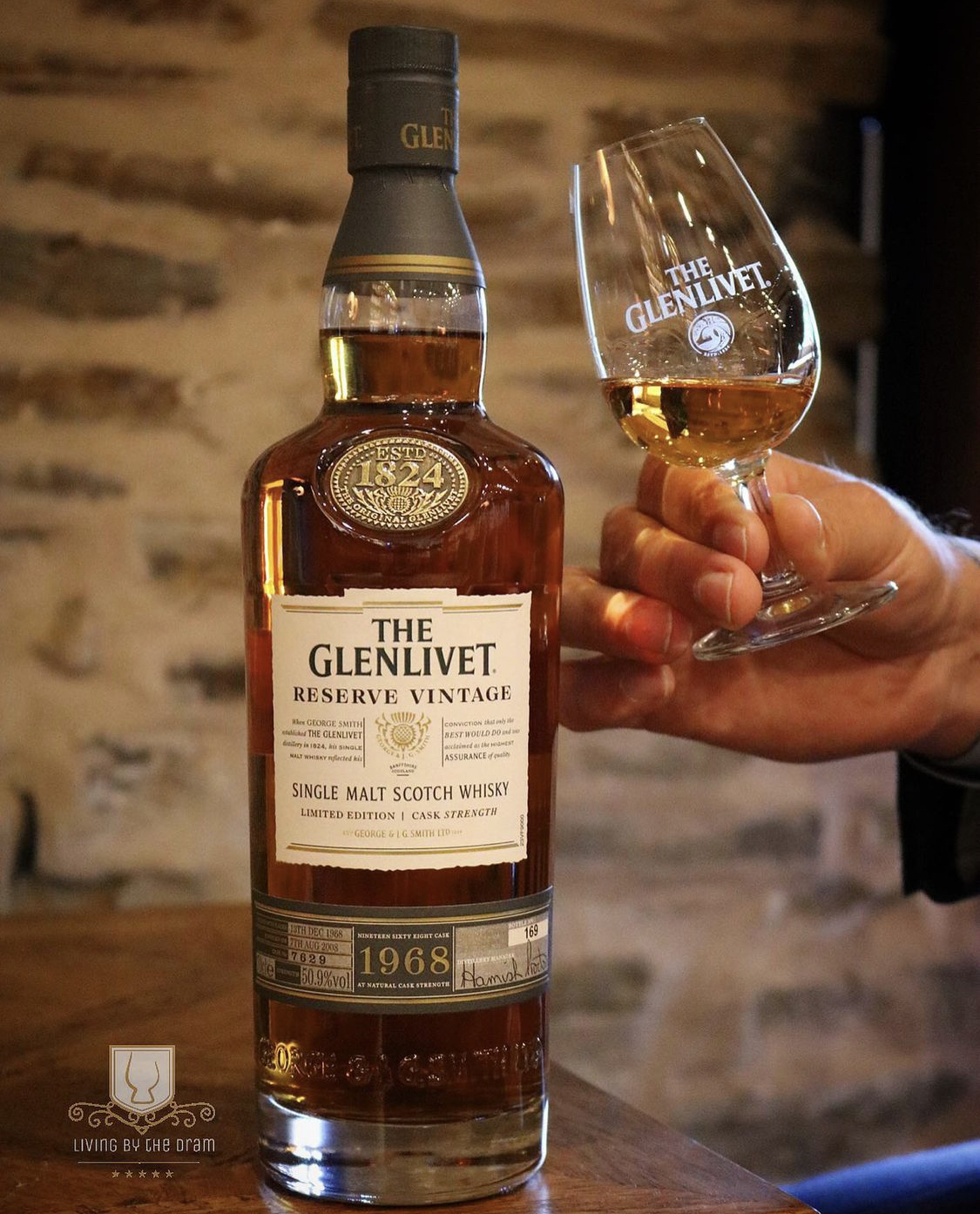 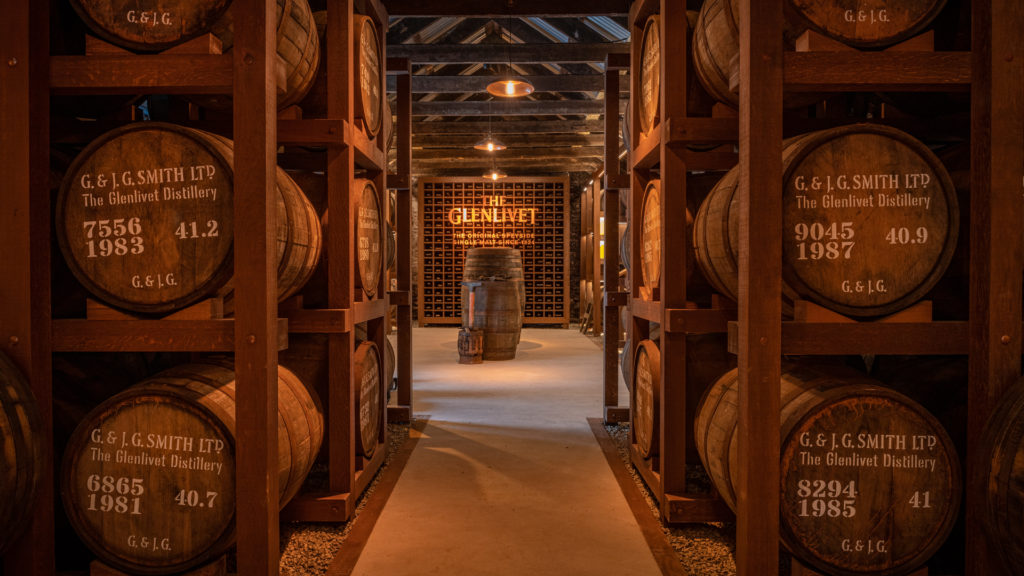 Our founder, George Smith, was a visionary and unafraid to break tradition.

Discover how we became the original Speyside Single Malt Whisky and join us in our Speyside Room* where you will meet the individuals who are integral to The Glenlivet today from our local farming community to our cask management team.

Learn and explore how we make our signature whisky with an immersive visual experience in our Process Room followed by a walk through our distillery and a visit to Warehouse 1.

Includes a guided tasting of our core range; The Glenlivet 12, 15 and 18 year old.

*Please note that our Speyside & Process Room uses a combination of audio-visual aids including sound, lighting and elements of fast motion media that may not be suitable for all audiences.

Over 18’s only – no children permitted.

£15 per person
The Single Casks

Explore four of our exclusive Single Cask editions from our Distillery Reserve Collection in this tutored tasting.

With this collection of whiskies being exclusive to The Glenlivet Distillery, this is a rare opportunity to taste side by side how each cask can create its own unique characteristics and will allow you to understand the importance of cask selection.

Over 18’s only – no children are permitted on this experience.

£30 per person
The Archives

Explore the art of maturation with an exclusive tour* of our traditional bonded Warehouse 3 at The Glenlivet.

We will delve into the finely tuned processes of cask selection and warehousing whilst discovering how the oak plays a vital role in making our whisky.

In one of our private tasting rooms, you’ll enjoy a carefully selected tasting of The Glenlivet’s oldest and rarest whiskies including The Glenlivet XXV, The Glenlivet 30 Year Old Cellar Collection and a dram from our archives.

Please email us to book on theglenlivet.admin@pernod-ricard.com

*Please note that this Experience does not include a tour of the distillery production areas.

Over 18’s only – children are not permitted on this experience.

£100 per person
The Cellar Collection

The Cellar Collection is an exclusive range from The Glenlivet only available at our distillery in Speyside, featuring some of our oldest and rarest whiskies ranging from 30 to 40 years old.

The longer maturation of these unique expressions gives an additional layer of depth and complexity to the whisky’s character and flavour, whilst maintaining the signature style of The Glenlivet: smooth, balanced and fruity.

We have spaces available on 3rd November @ 12pm and 4th November @ 12pm for the Spirit of Speyside Limited Festival.
For availability and to make a reservation, please email theglenlivet.admin@pernod-ricard.com

Enjoy The Glenlivet from the comfort of your own home with this online tasting experience.

The Glenlivet Distillery sits in a wild and remote glen, its history laced with drama and intrigue. Discover the interesting history of The Glenlivet and the process behind how we make our single malt as one of our Senior Hosts guides you through a selection of our Single Malt whiskies.

Available to UK Residents only (aged 18 or over). Delivery is free of charge.