The Macallan Fine and rare 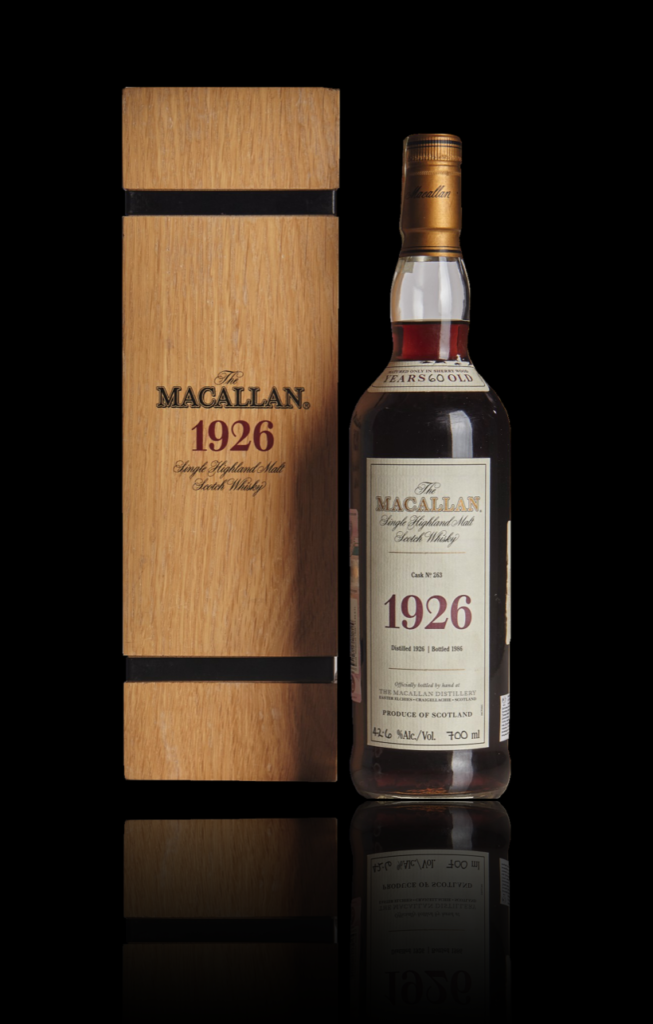 The small hand ticks at measured pace. The second hand, on the perimeter of a wider world, speeds along by comparison. So it is on The Macallan Estate, where the days are determined by a precise dial, no matter the velocity of life elsewhere.

The unchanging landscape of fields and woodland is overseen from an eagle’s clear perspective. Barometric readings tick off passing seasons. There is plenty of pause for thought, due contemplation of the natural surroundings. These elements combine, locked together securely, keys to an enduring character that is always independent but never isolated.

Abroad, some seek solace in the Roaring Twenties, following the storms of the Great War. Others pursue their paths with renewed diligence. Scotsman John Logie Baird introduces the world to television for the first time ever in this same year of 1926. At once, imaginations are transported at the flick of a switch. The invention’s immediacy is a far cry from the stately progress of the steam trains that once stopped at Dandeleith Station, the old railway station that sat below The Macallan, exchanging their hauls of coal, casks and barley for mature whisky to ship both home and abroad.

The product of profound values, The Macallan Fine & Rare 1926 represents, in turn, the most valuable bottle of single malt whisky ever recorded. It could not have come from a more treasured home. 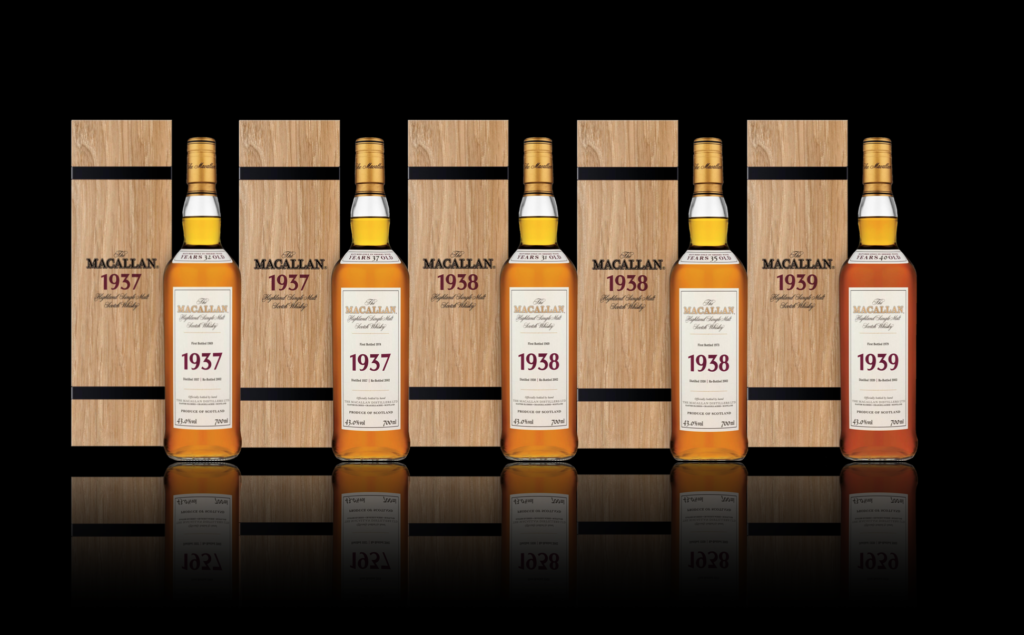 The 1930s were curiously transitional. The world see-sawed unevenly from the great depression, to the repeal of prohibition, to the brutalities of Spanish Civil War, depicted obliquely in Picasso’s Guernica. Ambivalence reigned, no better evidence than with the optimism of the New York World Fair and the bitter outbreak of a second war, both in 1939.

Austere hardship and glorious plenty are both epitomised in the Scottish thistle. Rooted in challenging terrain, it will still erupt into vibrant flower. Scottish iron and steel, those underpinnings of the Industrial Revolution, continued to bind the woodand copper mashtuns, washbacks and stills at The Macallan. Installed the century before, those vessels proudly delivered outturn after outturn.

While the patterns of life on the Estate continued, with a little hindsight, these years were elegiac, with many goodbyes in the wind. We may not, in some cases thankfully, see the icons, emblems and events of the 1930s again, but as a lasting, living memento of better days in Scotland, the 1937 Fine & Rare bottling makes for a wonderfully precious and inimitable souvenir. 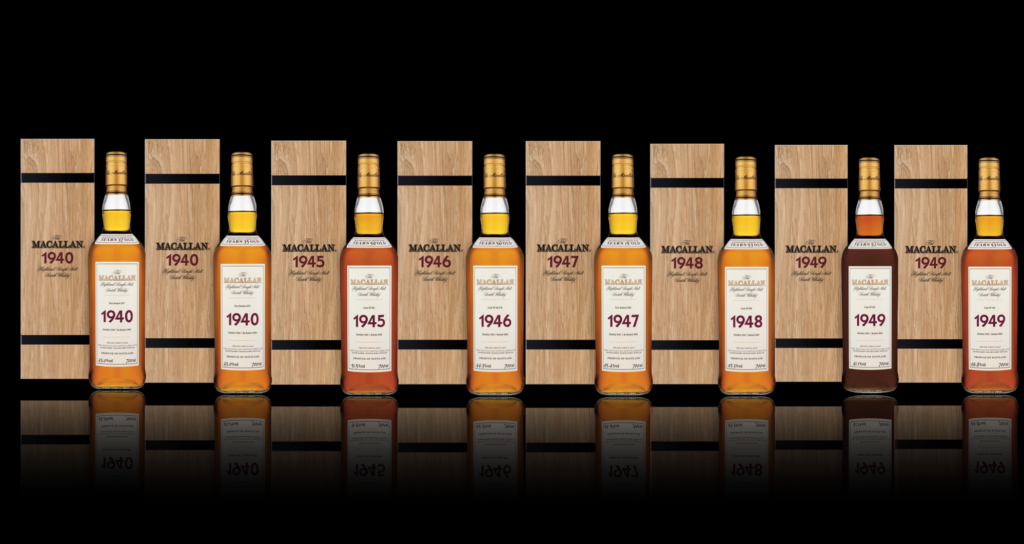 The 1940s were indisputably a game of two halves. conflict and tragedy gave way, with peace, to an extraordinary reawakening and the blossoming of a progressive future. Tucked away from turmoil, these influences were deftly interpreted at The Macallan.

Respect for the old ways did not diminish. Traditionally distinctive, peat smoke infused character is wonderfully evident in the Fine & Rare bottling from 1947. Back then, lives worn down by wartime reached once more for timeless pleasures, the familiar friends of cards, dominoes and golf. And yet, equally, new diversions beckoned. Air travel was taking off for all. The Edinburgh International Festival crackled into being in 1947, proudly weaving Scottish Arts into the national conscience. Music was everywhere. A spirit of exploration, both literal and cultural, awoke at home and abroad.

In this atmosphere, an increasingly independent path was anticipated at The Macallan. The dominant business of supplying the blenders’ market, would, in years to come, give way to play second fiddle to single malt bottlings, bearing the company name with unshowy simplicity.

It was time for ‘The Macallan’ to stand on its feet. In the post-war euphoria, the name already resonated with those who knew exceptional quality when they met it. For a fortunate few, some seventy years later, the amazing spirit of that optimistic age is happily available.

1950's
Foundations for the future

If the 1940s concluded with promise, the 1950s set foundations on which to build it for real. In 1953, a pendulum swing of just three days, between the triumphant ascent of Everest and Queen Elizabeth’s coronation, linked events that inspired incredible confidence. The sixties would swing in a different fashion.

On The Macallan Estate, nature continued to lend its own majesty. Darting over granite, quartzite and limestone rocks, smoothed by the rush of the River Spey, streaks of silver telegraphed the salmon speeding by. As they continued their epic journeys, up-river and far out to the Atlantic. That year, some of the whisky they swam past travelled further still, two hogsheads shipped to The Macallan’s first official American agent.

Silvers, blues, reds and russets. Colours were somehow more vivid after the drab, downplayed years of rationing. Fashions readied themselves for bolder steps to come. Art asserted itself in ways demanding redefinition. Close by Easter Elchies, the home of exceptional, single malt whisky, the artistry was captured in familiar, burnished golden form.

The 1953 Fine & Rare bottle is a perfect representative of that shared, positive time. Canny, future guardians of this unrepeatable souvenir will be able to share that joy with the greatest pleasure.

In 1960, Elvis Presley arrived in Scotland, the sole visit by the King of Rock and Roll. The decade rolled on to see seismic social change. In Hamburg, the Beatles began a 48-night residency. Martin Luther King dared to dream. These were the years that Scottish Ballet first danced sure-footedly onto the stage.

Easter Elchies House becomes the home of The Macallan, following its purchase. Pivoting off years of careful planning, the company’s reputation – and its whisky – travelled steadily across the seas (thank you, Poseidon).

The importance of water in The Macallan’s story, whether as clear, Highland springs, the swift River Spey or as the medium of worldwide shipping, cannot be diluted. The long march to single malt over blending gathered pace. On the London Stock Exchange, an initial share offering successfully funded a second production house to lay down more casks to meet ever growing demand.

Progressive and radical though the times may have been, there were serious concerns too. Conflicts flared across the continents and bravery took men into space and onto the moon. At The Macallan, steady eyes and sure hands maintained standards, quality and respect for nature at all times. The Fine & Rare 1967 is an elegant exemplar of a point in history where, while a generation may have lost its inhibitions, it never lost its bottle. 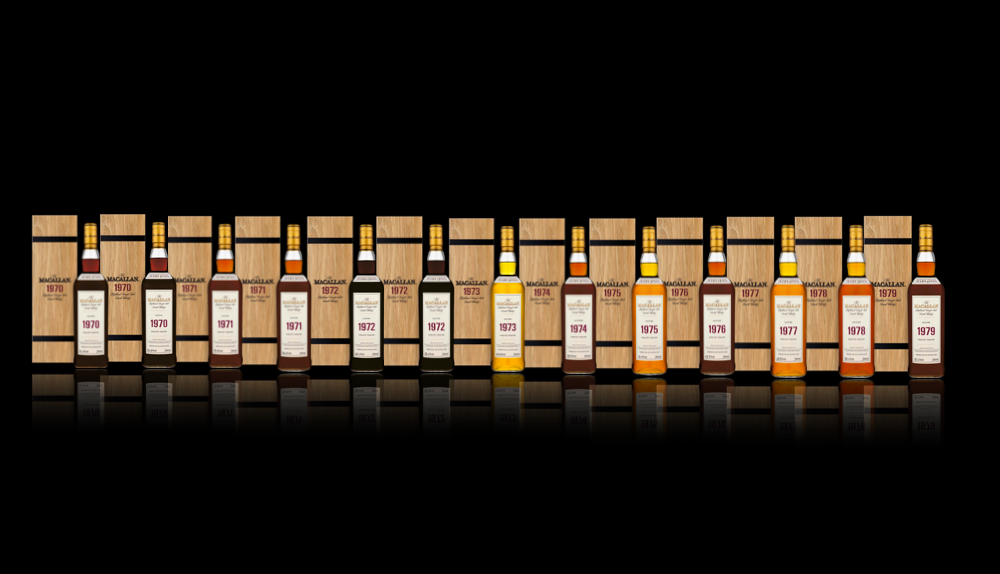 The 1970s saw a change in the weather. social and economic momentum were to falter noticeably in places. there were outbreaks of cynicism. Despite these, the grandparents of all consciousness – and fundraising events, George Harrison & Ravi Shankar’s 1971 concert for Bangladesh, ushered in a growing, global awareness. idealism took root. Greenpeace was born. The first wave-powered energy was created for Scottish homes. Respect for the planet began to mirror beliefs long held at Easter Elchies.

A fertile flowering in fashion, music and art continued without wilting. Bells were still sounding for growth in almost every sector. The war in Vietnam came to an end. North Sea Gas made its first ever Scottish landfall, piped directly ashore.

At The Macallan, the outturn from 1971’s spring barley harvest was piped every bit as carefully through to rest in European oak casks following distillation. Positive growth remained the watchword of the day. The company’s fortunes were as prudently managed, and proudly steered, as those of the Commonwealth Games, held in Edinburgh the year before and welcomed for their resounding success.

Amidst the complex, diverse narratives of the time, the 1971 Fine & Rare is an outstanding snapshot of excellence, proof positive that continuity, commitment and confidence can deliver a memorable result, whatever is blowing in the wind. 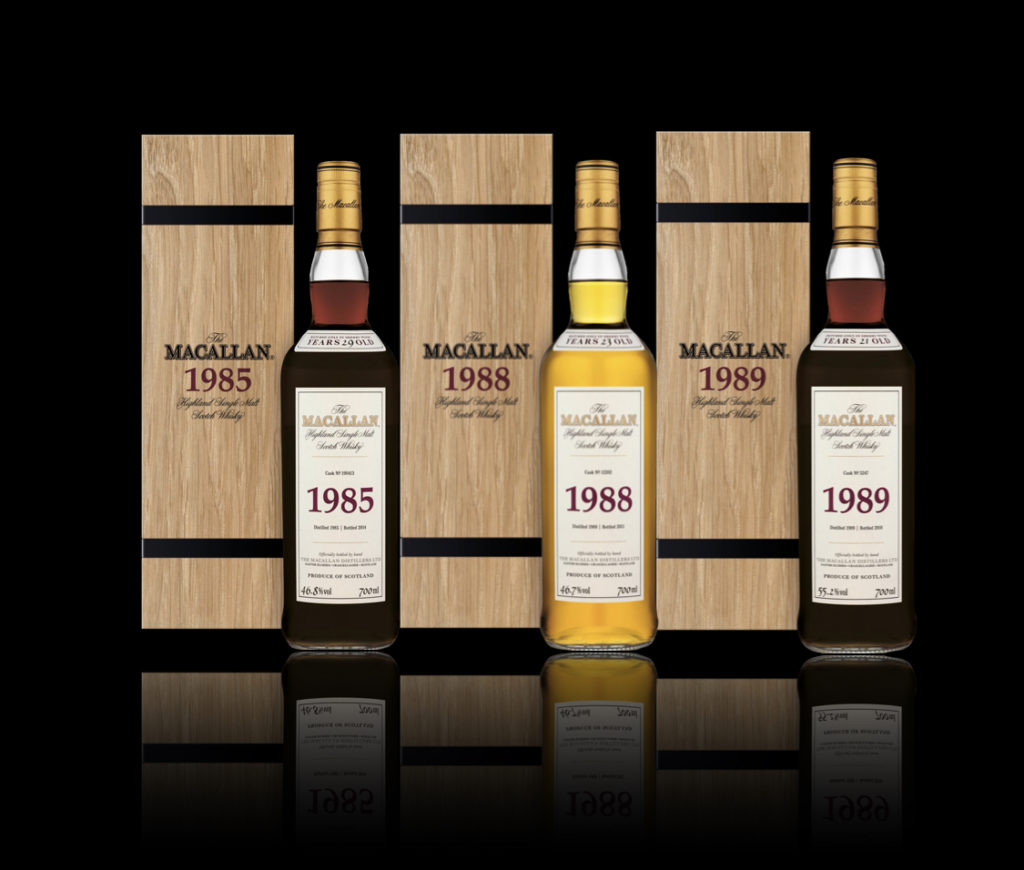 1980's
a decade of possibilities

In the 1980s, so much seemed possible. In a decade that was to see the invention of the world wide web, information darted around the globe with ever increasing speed. Tim Berners Lee’s gift to the planet unleashed innumerable flights of fancy.

The Macallan had built up a presence in 25 countries. For the United Kingdom, a first advertisement for the bottled whisky was placed modestly next to the Times crossword. Signed off as ‘The Macallan. The Malt’, the statement was welcomed as fact, not claim, by a growing band of loyal enthusiasts. These included the Bank of Scotland, which, the following decade would print an etching of a Macallan stillhouse on the back of the Scottish ten-pound note.

Easter Elchies House was officially re-opened in 1983 by Princess Margaret and woven back into the daily workings of the distillery. Nature continued its magical work while other, man-made icons of the time approached their closing chapters. 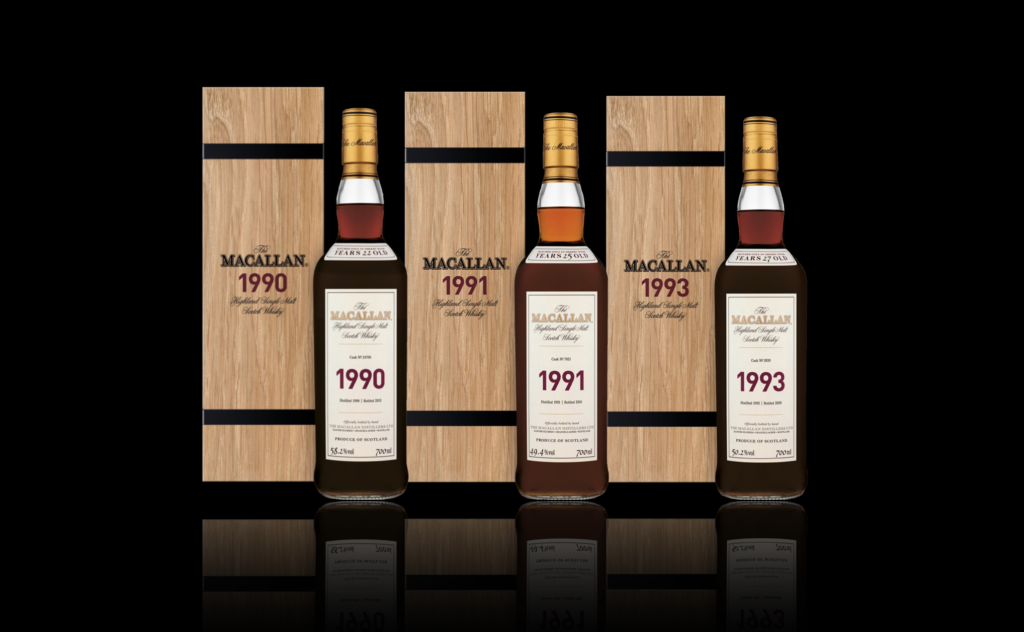 Nelson Mandela visited Scotland as apartheid was being dismantled. The Maastricht Treaty was finally negotiated, simultaneously creating the European Union and lighting a long fuse under British politics. The first trains took test runs through the channel tunnel.

While some news in the 1990s was, as with every decade, earth shattering, earth mattering stories became increasingly notable. Concern for the planet was on the march.

On Easter Elchies Estate, this was hardly revolutionary. Then, as now, The Macallan revelled in its natural home, beside the River Spey, in a peaceful, rural setting. The elements of whisky making – spring water, barley, oak – were patiently combined to create superlative single malt whisky. Profound respect for the local flora, fauna and landscape was evidenced in the responsibility shown towards them. That ethos continues to this day in a fully sustainable drive towards zero carbon.

The Fine & Rare 1993 is therefore neither the outturn, nor the upshot, of some passing fad. Warmly redolent, it was selected for its balance, influenced by the harmony of the spirit, the particular sherry seasoned American oak and the time spent in cask.

It is, absolutely, a crafted product of its era. As with quirks in the weather, so there are joyful accents, natural variations that make the bottlings of Fine & Rare single malts from The Macallan such magic. 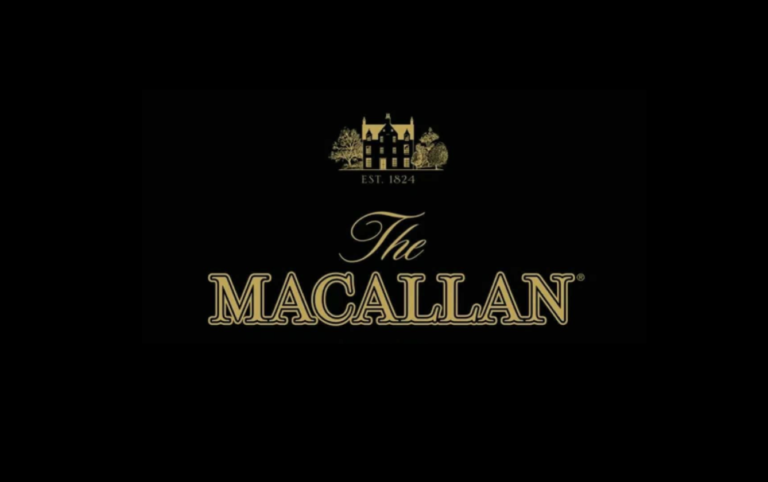 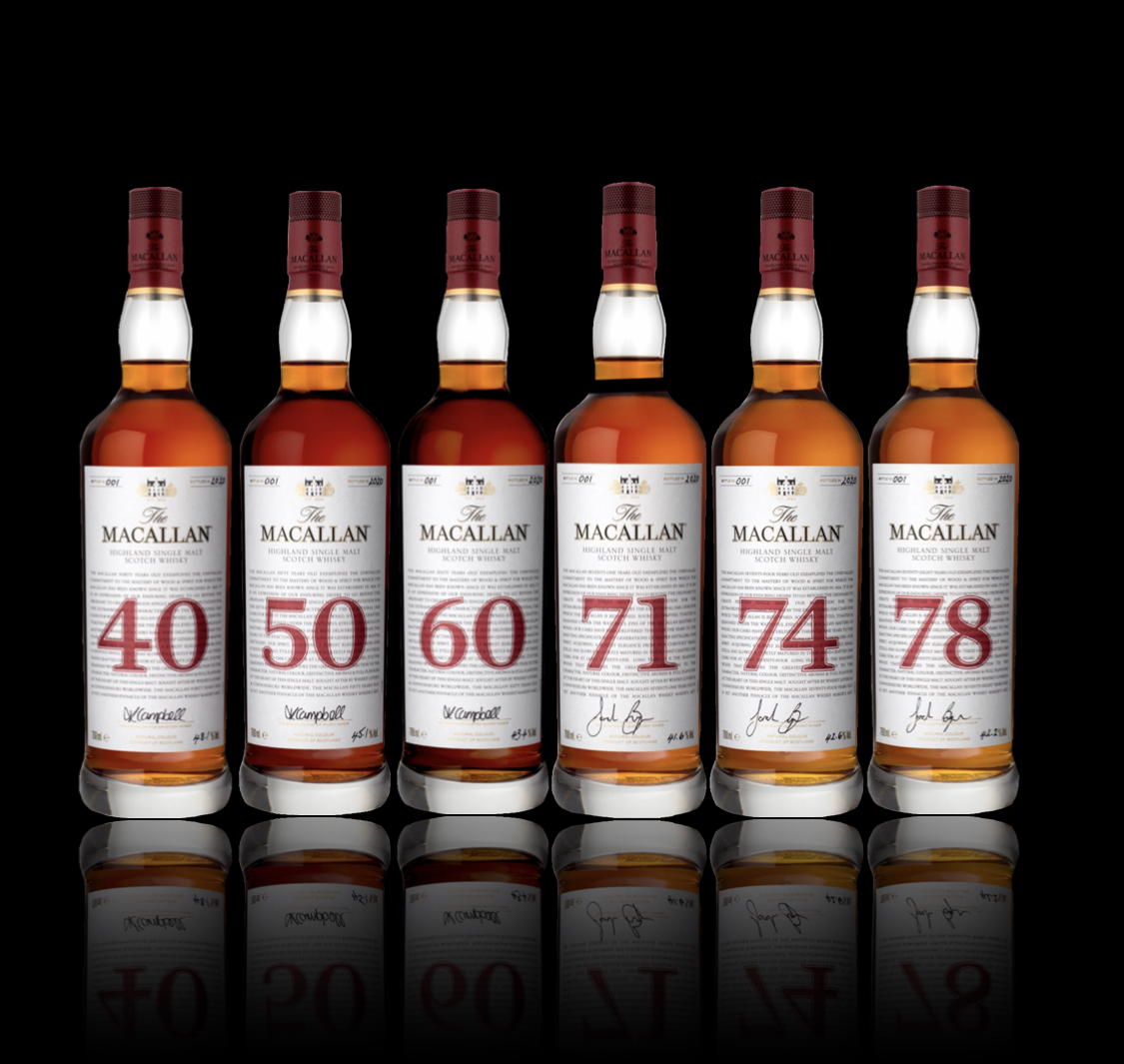